ASERT: Before and After

With the recent market fluctuations, I am seeing user enquiries about the performance of the new difficulty adjustment algorithm, ASERT, which replaced the previous one (referred to simply as DAA) on November 15, 2020.

I thought it would be good to open an analysis and discussion thread, to collect data and statistics that will give us all a picture of how the new algorithm has performed up to date.

What I do not have, but what would be useful data, is the time from when a transaction was first seen until it was confirmed on the network. One of the anticipated benefits of ASERT would be to reduce the average time this takes.

Before we look deeper, I want to post some of the charts and figures out there.

This retrospective across BCH existence from 2017 until today, from bitinfocharts.com gives a nice overview. I’ve added bars to delineate the various algorithms in use (EDA in 2017, DAA from Nov’17 to Nov’20, and ASERT from Nov’20 until today).

User enquiries into “block time stability” are primarily driven by blocks that take a long time to mine, and exacerbated if their transactions are not included in the next block.
There are good explorer sites nowadays that include how long it took to to mine each block, even helpfully color-coding the instances where blocks take long. 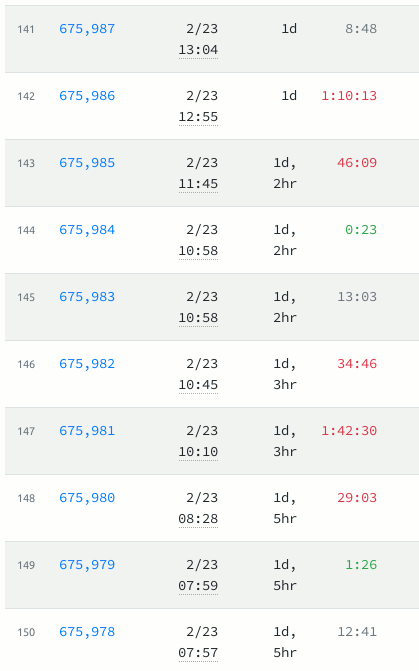 Understandably, users notice that blocks sometimes take an hour or longer, and wonder if the ASERT DAA is meeting its stated objectives.

I’ll include here the first 8 goals from Jonathan Toomim’s ASERT post (since the last 4/12 were about the new algorithm’s design properties and not about its performance):

Basic descriptive statistics, compiled a while ago:

Data provided by @alex_asicseer which shows a bit of improvement in the ratio of current/median (432 blocks) difficulty after ASERT activated: