You know, I think another discussion made this finally “click” with me just now!

Stuffing it all into p2sh would make the proposal lose the appeal, at least to me. Because then you couldn’t tell that some output is a token output without also receiving the actual script through some side-channel. This would complicate a lot of things, how would you build a token explorer if you couldn’t tell where those tokens are on the blockchain? You’d have to somehow collect all those scripts externally, and there’d be no way to tell whether you got them all.

While pondering this, I realized that CashTokens is exactly where you’d arrive at if you want to solve those problems I describe! Let me see if I got it right:

One detail, where do you store the token state? It must live outside the part that’s enforced to be the same in this covenant chain. So I guess it’s somewhere in the input script and that part doesn’t need to satisfy the in==out but must satisfy CashToken semantics which are verified with the fixed part, something like that yeah?

Hey everyone, just wanted to share an update on PMv3:

I’ve spent a lot of time testing these ideas over the past few months, and I stumbled upon a modification to the PMv3 draft that both 1) fixes a malleability vector and 2) opens a path for signature aggregation.

In the first draft of PMv3, I had originally discounted 3rd-party malleability as a significant problem. In the Bitcoin Cash world, we have both covenants and reasonably secure zero-confirmation transactions: malleability is at most an inconvenience. (We’re not trying to migrate most user activity onto chains of signature-less transactions.) However, when @rnbrady identified the arbitrary detaching/re-attaching above, I realized malleability needs to be directly addressed for detached proofs (formerly “Hashed Witness”), since 3rd parties could actually disrupt important activity (beyond just fiddling with the TXID before confirmation).

In working on solutions, I spent a lot of time thinking about optimizing contracts, covenants, and transactions in general. I realized there are several closely related problems that an ideal solution should cover:

There are several possible solutions for each of these, but there is one particular solution I think is very elegant – it’s now specified in the CHIP: 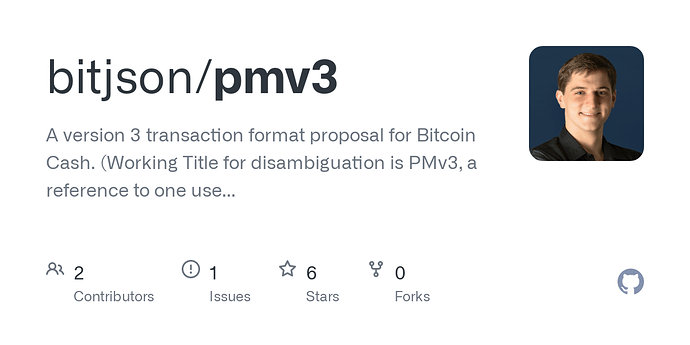 A version 3 transaction format proposal for Bitcoin Cash. (Working Title for disambiguation is PMv3,&nbsp;a reference to one use case: prediction markets).

I’ve incorporated the answers to many of the questions from this thread, so thank you again to everyone who has contributed here.

I’d appreciate any feedback, reviews, or questions you have, either in this thread or in the GitHub issues. Thanks!

Ah, sorry to keep you waiting for an answer here – your numbered steps are very close – maybe Richard’s summary will help to make 4 through 7 clearer:

This can be translated to “my grandparent pays the same P2SH address as my parent”. This can be proved as follows:

In the latest CHIP revision, I’ve tried to make things a bit clearer too, but I may try to add an appendix of sorts to walk through this particular “cross-contract interface” in detail.

One detail, where do you store the token state? It must live outside the part that’s enforced to be the same in this covenant chain.

Yes! Each tokens’ “genesis” transaction hash It’s stored in the top-level “corporation” covenant, which holds the full set in a merkle tree. So CashTokens can be moved around independently, then eventually checked-back-in to the top-level covenant. If you haven’t read it yet, see the description in the CashTokens demo.

That may help to get a sense for why detached proofs are so useful – they allow contract designers to build interfaces between different contracts (without resorting to the “global state” model of systems like Ethereum).

In the case of CashTokens, I’ve written a simple top-level covenant to keep track of 4, homogenous child “token” covenants. But this same strategy is useful for breaking even very large contracts up into smaller subcontracts.

In general, with PMv3 we can implement new token schemes and other high-level contract protocols entirely at the wallet/application layer, without network-wide upgrades or other coordination.

Wow, this addresses so many of my blocking questions that I will be able to give another go understanding what Jason created. Thanks so much Richard!

@bitjson looking at the chip fresh after talking yesterday, there is one thing I notice that I didn’t mention before - I think a contrast exercise would be helpful for both high level general understanding and high level technical understanding. What I mean is taking a contract or use case and then showing where the dividing line is: Currently we can only do X. With pmv3 then Y becomes possible. The CHIP as I read it now basically skips straight to Y so it is harder to understand the scope of the gain.

Good idea, thanks! I’m just now realizing that this revision doesn’t even link to the CashToken demo anymore.

I’ll work on adding that appendix directly to the spec. Probably want 2 examples:

As a followup and to make things more concrete I have the following suggestion for your proposal.

I would like to split the proposal into two parts with the aim to simplify activation and to make sure that we have a smaller change that I believe can reach consensus next May.
The actual changes in the transaction format would then become this;

The direct result of seperating your one CHIP is that parsers that read current (v2) style transactions will very likely not need to be modified to accept v3 transactions. Afterall, you just add some more data to the end. Even TXID calculation is going to be unchanged.
This is going to make deployment much simpler and since the May 2022 upgrade already has a large number of proposals I think it makes sense to keep it simple.

Changing the integer-format (the var-int idea) in transactions is simply a much more invasive change, 100% of the existing transaction-parsing code will need to get support that and for that it really makes sense to wait until after Restrict Transaction Version has activated which is specifically meant to make this kind of deployments simpler. Hence the suggestion to push it forward.

So, the separation of those more invasive transaction changes out of the detached signature change would be nice to move to the upgrade of 2023 to give ourselves as well as the wider ecosystem plenty of time to get it right.