Distribution of the Age of Spent Outputs for BTC, BCH, LTC, and DOGE

I’ve performed some statistical analysis of spent output age for BTC, BCH, LTC, and DOGE since 2015 to inform an improved Monero decoy selection algorithm. I don’t think anything actionable for BCH directly comes from this research, but it’s interesting nevertheless. This analysis is related to the “coin days destroyed” metric, although I take into account only the age of outputs and not their value.

To me, the main surprises in the analysis are:

Due to formatting and gif files size issues, I omit the “Evaluation of forecast accuracy” and “Animated evolution of distributions” sections on this forum post. Those sections are in the full write-up here:

Summary characterization of distributions over time

The first set of graphs show several statistics about the age of spent outputs of BTC, BCH, LTC, and DOGE since 2015. The age units are in terms of blocks. For BTC and BCH the interval between blocks is 10 minutes. For LTC it is 2.5 minutes and for DOGE it is 1 minute. The unit of observation is the ISO week, a natural unit of economic time.

The first line graphs show the mean, median, standard deviation, skewness, and kurtosis. The skewness and kurtosis statistics may be unfamiliar. They are the third and fourth standardized moments of a distribution, respectively. The moments of a distribution is defined by a power of the expectation \mathrm{E}[X] , i.e. theoretical mean, of the distribution. The k th moment is \mathrm{E}[X^{k}] . Moments extend the concept of moving from expectation to variance (which is the square of the standard deviation). The mean (expectation) of a random variable is simply the first moment:

The variance is the second central moment:

The skewness is the third standardized moment (standardized by the standard deviation \sigma):

The kurtosis is the fourth standardized moment:

The fitting function is essentially a minimum discrepancy estimator. This means that the parameters of the parametric probability density function (PDF) are chosen to minimize the distance between the parametric PDF and the PDF formed by the data (the empirical PDF), for some specified metric of “distance”.

There are several measures of distance that could be used. For the purpose of this exploration of output age distribution forecasting, the distance metric to be minimized will be the total linear sum of the mass of the estimated parametric PDF that falls below the empirical PDF. With the “loss function” specified this way, the optimization algorithm attempts to minimize the probability that the real spends are much more likely to come from a block of a particular age compared to a potential decoy. Ideally, the decoy distribution would be identical to the real spend distribution, but parametric PDFs are not flexible enough to perfectly match an empirical PDF.

with shape2>0 and sdlog>0 and where \Phi is the cumulative distribution function of the standard Normal distribution. 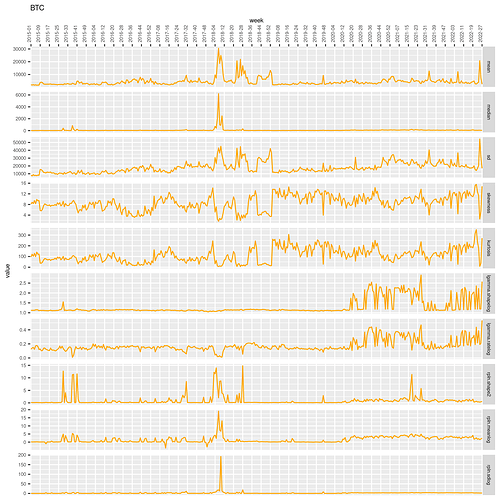 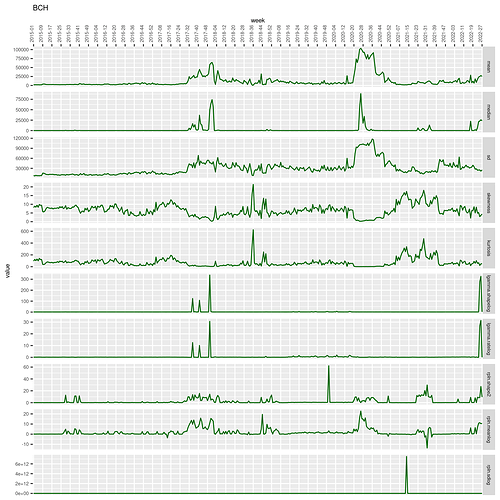 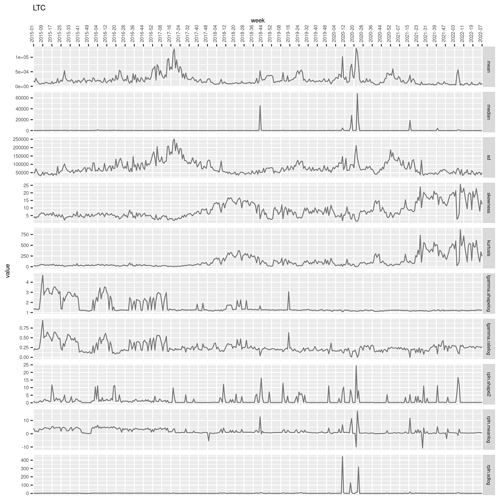 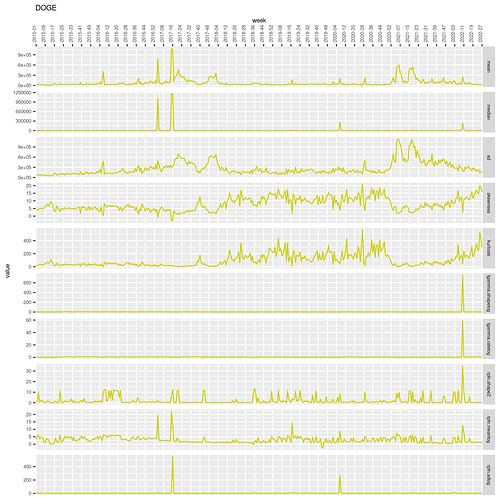 The following table contains the correlation between several statistics over time for each pair of blockchains. The “BTC&BCH” correlation included data only for January 2018 onward to avoid artificially raising the correlation by including weeks when the BTC and BCH contained the same transaction before the August 2017 hard fork.

The two statistics that tend to have consistently high correlation for each pair of blockchains are skewness and kurtosis.