This article also appeared on read.cash and my website.

As government scrutiny of cryptocurrencies has intensified over the last several months, concern has grown over the possibility of a two-tier market for cryptocurrencies that have a transparent ledger. On one side, there are “clean” coins that are held and disbursed by centralized exchanges that require identity documents to comply with government-mandated Know-Your-Customer (KYC) regulations. On the other side, there are “dirty” coins of a unknown provenance that may come from mixers, CoinJoin transactions, and peer-to-peer trading. The world of “dirty” coins includes thieving hackers but also ordinary people who merely want to maintain their privacy amid increasingly intrusive mass surveillance.

A CoinJoin is a special type of cryptocurrency transaction that obscures the source and destination of payments by bringing together the coins of many different users within a single transaction. Bitcoin Cash (BCH) developers created a CoinJoin implementation called CashFusion, officially released in July 2020. BCH users have participated in over 125,000 CashFusion transactions.

The Financial Action Task Force (FATF)'s “Virtual Assets Red Flag Indicators of Money Laundering and Terrorist Financing” report identifies CoinJoins (referred to in the broader mixer category) as one of several “red flags” that centralized exchanges and payment processors may want to investigate or block:

The various technological features below increase anonymity and add hurdles to the detection of criminal activity by [Law Enforcement Authorities]. These factors make [Virtual Assets] attractive to criminals looking to disguise or store their funds. Nevertheless, the mere presence of these features in an activity does not automatically suggest an illicit transaction…

Indeed, users of BCH have recently discussed reports of CoinJoined BTC coins being blocked from established services, wondering if BCH that has passed through CashFusion transactions may one day be blocked. These concerns have only increased with the introduction of new rules requiring Coinbase users in Canada, Singapore, and Japan to provide more identity information about recipients of cryptocurrency transactions and today’s vote on stronger KYC requirements in the EU.

These issues raised in my mind the question of how well-integrated CashFusioned coins are with the rest of the coins on the BCH blockchain. Is CashFusion restricted to a small corner of the blockchain – either due to isolated users or established services segregating the coins – or are they spread widely through the blockchain?

In other words, if established services wanted to completely avoid dealing with BCH that had ever passed through a CashFusion transaction, would they be able to?

After a couple of months of on-and-off coding and several weeks of computation time, I can finally answer that question: No, not as a practical matter.

I have found that 94 percent of the value in the UTXOs created between July 29, 2020 and December 23, 2021 (corresponding to block heights 646085 and 719602) is a direct or indirect descendant of a CashFusion transaction. This represents 10 million of the 19 million BCH that currently exist.

Visualization: What is a CashFusion Descendant in the UTXO Set?

The UTXO set is all of the outputs that have not yet been spent. In other words, the UTXO set is the grand total of all coins that BCH owners possess in their wallets, available for them to spend.

The blue circles, on the other hand, represent spent outputs that do not have any CashFusion ancestors. If an output is unspent but remains untouched by a CashFusion transaction, then it is green. Notice that when blue circles combine with purple circles, their descendants are all purple. 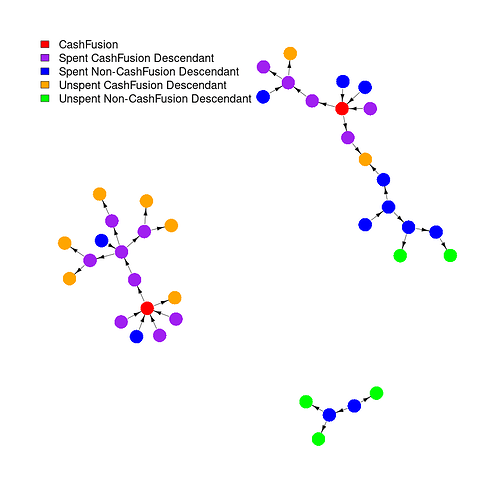 In the figure, the total value of the UTXO set is the sum of all coins contained in both the orange and green circles. When I say that 94 percent of BCH in the UTXO set created in the last year-and-a-half is a descendant of a CashFusion transaction, I mean that the orange circles contain 94 percent of the value of the orange and green circles combined. Another way of describing this UTXO set is that these are coins that are in “active addresses” on the BCH blockchain.

To identify the CashFusion descendants I wrote code in the R statistical programming language to query the BCH blockchain, construct the transaction graph consisting of over 200 million vertices and 280 million edges, and traverse the transaction graph to identify all UTXO vertices that were reachable starting from the CashFusion transactions. Pivotal in the process were the rbch package, which I adopted from the rbtc package with support from my Flipstarter campaign, and the igraph package for fast graph analysis operations.

I have released the R code under the GPL-3 open source license here. The finalized dataset containing the UTXO set and indicators for whether each UTXO is a CashFusion descendant is available here.

94 percent of BCH may be a CashFusion descendant, but how many “generations” of transactions separate a typical UTXO from its closest CashFusion ancestor? I took a random sample of 1,000 CashFusion-descended UTXOs from the UTXO set and computed the distance to the nearest CashFusion transaction.

Would a chain analysis firm be able and willing to track CashFusioned coins through so many transactions? Yes. Chainalysis reported that they are tracking BTC associated with the PlusToken scam even though they have been involved in tens of thousands of transactions: “The scammers have transferred the Bitcoin more than 24,000 times, using more than 71,000 different addresses…”

The large distance between the typical UTXO and its nearest CashFusion ancestor indicates that many transactions must have occurred between the CashFusion transaction and the UTXO – and therefore, most likely much time had passed. To gain insight into this issue, I re-ran the analysis for just the month of February 2022 (block heights 725290 to 729371).

Can this analysis be done for BTC? Yes and no. The code that I wrote should in theory be inter-operable with the BTC node software. The main barrier to a corresponding analysis of BTC CoinJoins is the effort required to identify all of the BTC CoinJoin transaction.

Speaking of the cashfusion.redteam.cash web app, could this analysis become one of the metrics that the web app tracks? Perhaps. This analysis that takes July 2020 as the starting point required weeks of computation time. Because of the way that the transaction graph is connected, an “update” to the data would still require a similar time for re-computation. However, since completion of the analysis I have thought of a shortcut that could dramatically reduce the computation time. I have not yet tested the idea, but if successful I could incorporate this metric into cashfusion.redteam.cash

The Future of BCH

Frankly, I was a little shocked at my results. I didn’t expect that CashFusion would be so well-integrated into the rest of the BCH blockchain. Of course, to some extent the level of integration is high due to how I’ve defined it: A descendant is a descendant no matter how many transaction separate it from its ancestor CashFusion transaction.

In spite of the fact that CashFusion is so well-integrated, I have seen no credible reports of a centralized exchange rejecting deposit of BCH due to CashFusion ancestry, whereas rejection of BTC due to a recent CoinJoin is a fairly common occurrence at this point in time.

On the other hand, that may be because of – not in spite of – the fact that CashFusion is so well-integrated. Perhaps centralized exchanges choose not to ban recent CashFusion descendants because they would be locking themselves out of a substantial proportion of BCH in circulation. Another possibility is that BCH overall has “flown under the radar” of anti-privacy policies since it is a minority-hashpower hardfork of BTC with little reputation of nefarious activities happening on its blockchain.

As use of CashFusion expands and more wallets integrate it as a feature, will BCH become akin to Dash or Decred, which have optional CoinJoins integrated into their protocols?[^2] And therefore will centralized exchanges and services be forced to accept CashFusioned coins as a routine part of dealing in BCH? Or will there be a crackdown?

Thanks to kayabaNerve and plowsof for reviewing a draft of this post.

[^1] : Since this is a sample of a population, there is sampling error. In my professional opinion, a nonparametric bootstrap is appropriate for constructing confidence intervals in this setting since graphs can have unusual statistical properties. The 95 percent confidence intervals on median, mean, 25th percentile and 75th percentile are (367, 595), (1128, 1304), (29, 31), and (1648, 2059), respectively.

[^2] : Note that Dash has sought to distance itself from its reputation as a privacy coin.

Wow, this is fantastic news! Thanks for your work!

I don’t have much to add, just wanted to bump this thread. I hope we can get more focus on improving privacy for Bitcoin Cash users.

People need to understand that meaningful privacy is a critical, real-world security feature.

A terrifying number of cryptocurrency networks are so anti-private right now that even an unsophisticated attacker can e.g. hand out tips (“free beer”) at a meetup to identify the on-chain net worth of most of the participants.

It doesn’t matter how secure our software is if the average user’s privacy is so easily compromised. Even well-regarded physical security services are not equipped to handle the kinds of crime we can expect against average users in a world of low-privacy finance.

Edit: a link that belongs in more discussion about financial privacy: 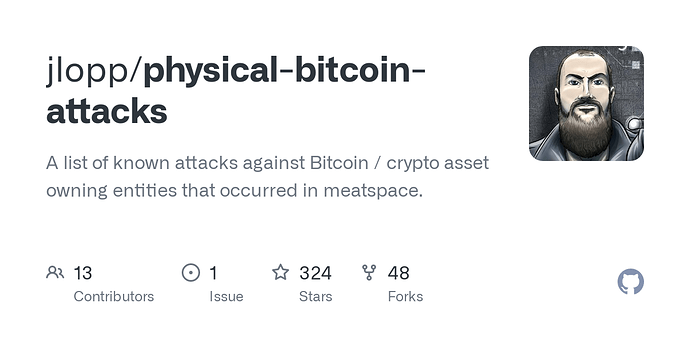 Ah, something to add – if anyone is interested in developing real-time blockchain privacy analysis, please consider taking a swing at this issue! Once you sync an instance, you can get interesting results in just a few lines of SQL or plpgsql:

The ecosystem needs better (public, open source) visibility into privacy leaks t…o continue improving privacy for average users. And in the non-custodial world of cryptocurrency, **privacy is protection** from theft and physical violence, particularly for less wealthy users and those living under failing regimes. Particularly when claiming funds after chain splits, transactions from multiple chains often reveal far more about a user's activity than they realize. **Chaingraph is uniquely suited for clustering and privacy analysis because we can easily operate across multiple chains**. Privacy analysis features need not take nodes acceptance into account at all, clustering should be performed on all transactions in the database, regardless of chain. [Blockchair's Privacy-o-meter documentation](https://blockchair.com/api/docs#link_M6) is probably the best summary of available clustering heuristics. (See also – [this excellent thread about privacy leak via address types](https://twitter.com/nikzh/status/1332246112196063232).) Chaingraph should implement and display some of these heuristics by default, and make it easy to enable the rest for block explorer-type applications. In addition to those heuristics, we should try to support clustering by timing information. (E.g. merge avoidance isn't very useful if several chains of otherwise disconnected transactions are inactive for months but always move in the same hour.) We should also add opt-in support for tracking and querying the actual address clusters. (#29 will probably be valuable for performance, I imagine we'll want to do most of the computation on the agent before saving transactions to the database.) In addition to being able to query the full list of clustered transactions, it would be fantastic if we supported materializing columns for: - transaction count - earliest known transaction (by timestamp of earliest including block) - most recent transaction (by timestamp of latest including block) - total funds received (spent and unspent) - total unspent balance Finally it would be nice to support aggregated statistics (depends on #32) for: - total clusters (as an estimated wallet count) - total clusters active in the past day/month/etc., - largest clusters, - most active clusters (by volume) - average and percentile clusters balances. (Keyword for searchers: coinjoin, coinshuffle, cashshuffle, cashfusion, taint analysis)

Chaingraph is particularly well suited to cross-network privacy analysis – any BCH-like node can be connected, and the database shares transaction information across chains.

E.g. BCH and XEC share practically their entire history, so adding an XEC node to an existing, BCH-synced Chaingraph instance currently takes only a few minutes, and then privacy leaks can be analyzed across both networks. If some funds move on BCH but not XEC – and then later moved in a different way on XEC – indexes/functions running on Chaingraph can integrate that information to perform more thorough analysis than would be possible on a single-node system.