This proposal replaces several poorly-targeted virtual machine (VM) limits with alternatives which protect against the same malicious cases while significantly increasing the power of the Bitcoin Cash contract system:

This proposal intentionally avoids modifying other properties of the current VM: 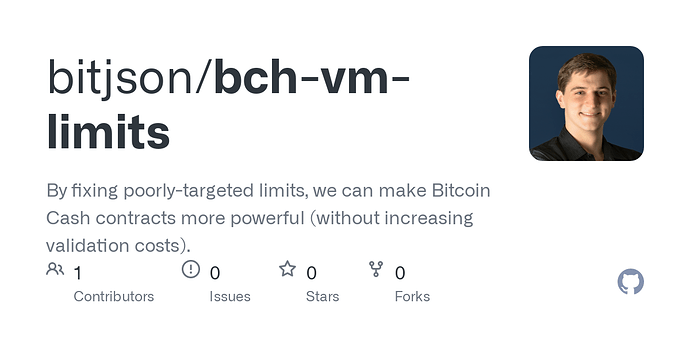 Comments, feedback, and reviews are appreciated, either here or on GitHub issues. Thanks!

I think there are two current limits which most constrain the functionality of the Bitcoin Cash VM. They are closely related, and any changes to them must be tested together. What work needs to be done before these limits may be relaxed? 520 Byte Push Limit This limit prevents items longer than 520 bytes from being pushed, OP_NUM2BINed, or OP_CATed on to the stack. In the C++ implementation, the constant is called MAX_SCRIPT_ELEMENT_SIZE. The limit was present as a magic number in the earliest…

Found this CHIP was missing, it is needed by the Bounded Loops CHIP.